Enroll Now To Reserve Your Spot

Many law schools teach 1L students to write in the IRAC format, and it’s probably a great tool for general legal writing. But if you’re headed for the Virginia Bar Exam, IRAC is a waste of time. You only have an average of 35 minutes per essay to read the fact pattern and write your answer. Every minute is at a premium, so you must invest your minutes into things that generate points.

Virginia Bar Examiners are helpful folks. In many essay questions, the examiner has already identified the issue for you. They do this in the specific questions that follow each essay fact pattern.  For example:

“How should the Court have ruled on Julie’s objection to admitting into evidence the deposition testimony of the two eyewitnesses?”

When answering this question under the traditional IRAC method, you might start by identifying the issue:

“The issue is whether the deposition testimony should be admitted into evidence.”

Starting your answer that way makes very little sense. The examiner already gave you that information in the question. Instead, you should start your response by succinctly stating the rule:

“Under the Virginia Rules of Evidence, a deposition may be admitted into evidence in a civil proceeding when the witness lives outside of Virginia, and it is being used against a party who was present or represented at the deposition.”

After stating the rule, apply the facts from the question and conclude:

“Here, both witnesses live outside of Virginia, and the lawyers for Ted were present at the depositions. The depositions are admissible and the Court should overrule Julie’s objections.”

Leaving off the “issue” statement forces graders to focus on the substance of your answer. Anything that doesn’t directly answer the exam question is a potential distraction for very busy graders, who might not take time to search for the correct part of your answer if it is buried in a sea of irrelevant sentences. It really starts to save time and space on the larger multi-part questions that address several rules and sub-rules.

Longer Is Not Better

Do not impose a minimum length requirement to your answers. Bar takers hear the word “essay” and assume they need to write three pages to answer the question. You can answer many bar exam essay questions, like the example above, in 3 to 4 sentences. The Virginia Examiners tend to present a long fact pattern, followed by 2 to 5 questions about that fact pattern. Each question will usually identify the issue. Some of the questions you will be able to answer in 3 sentences. A couple of questions on the exam may require two paragraphs or three paragraphs.

Think of the Virginia Bar Exam Essays as short-answer questions instead of essay questions. You should answer them with a clear rule, then apply facts from the fact pattern to that rule, then state a one sentence conclusion. In some cases, your conclusion will naturally be part of your application sentence. In other cases, it will be okay to have more than one conclusion using if/then statements, which we will discuss in a future post.

You Must Memorize The Rules 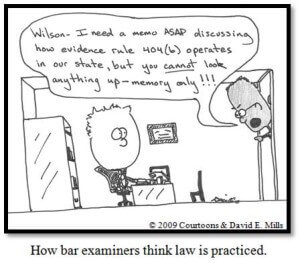 The number one mistake Virginia Bar takers make is spending massive amounts of time perfecting their essay writing skills and essay structure, but not enough time memorizing the applicable Virginia rules. I think this contributes to the over-writing of essays. When you’re not sure of the rule you may tend to write irrelevant marginally-related rules, in hopes you can get some points.

Flashcards are helpful for many students. You must have the commonly tested rules memorized so well that you will not have to think about it when you see the issue in an exam question. When you haven’t spent enough time memorizing, you can easily ‘freeze up’ on the exam trying to think of which rule applies to the issue. Practicing for the essays necessarily includes testing yourself repeatedly on the legal rules you will have to apply. Speaking of testing yourself as part of studying, read why it doesn’t really matter that you keep getting the answer wrong.

Registration is open for students taking the February 2023 bar exam.

Registration will close when the class reaches capacity.

The opinions expressed on this site are the personal opinions of the authors. LexBar is a private company engaged in offering educational services for law students taking the Virginia Bar Exam. We do not provide legal advice or legal services of any sort. We have no official connection to, or endorsement by, the Virginia Board of Bar Examiners, Virginia State Bar, or any other state agency, department, or organization.